It is the sole responsibility of the health care provider to correctly report all procedures and therapies. The following information is shared solely for informational and educational purposes.

Anterior knee pain commonly involves the femoral nerve and, most commonly, the AFCN and 2 branches of the ISN. Other superficial nerves that innervate the knee, such as the LFCN, may also be involved.

The diagnosis associated with the use of cryoneurolysis with iovera° may include knee pain (ICD-10-CM code M25.56X) or osteoarthritis of the knee (M17.X). The X is replaced with “1” to identify the left knee and “2” to identify the right knee. 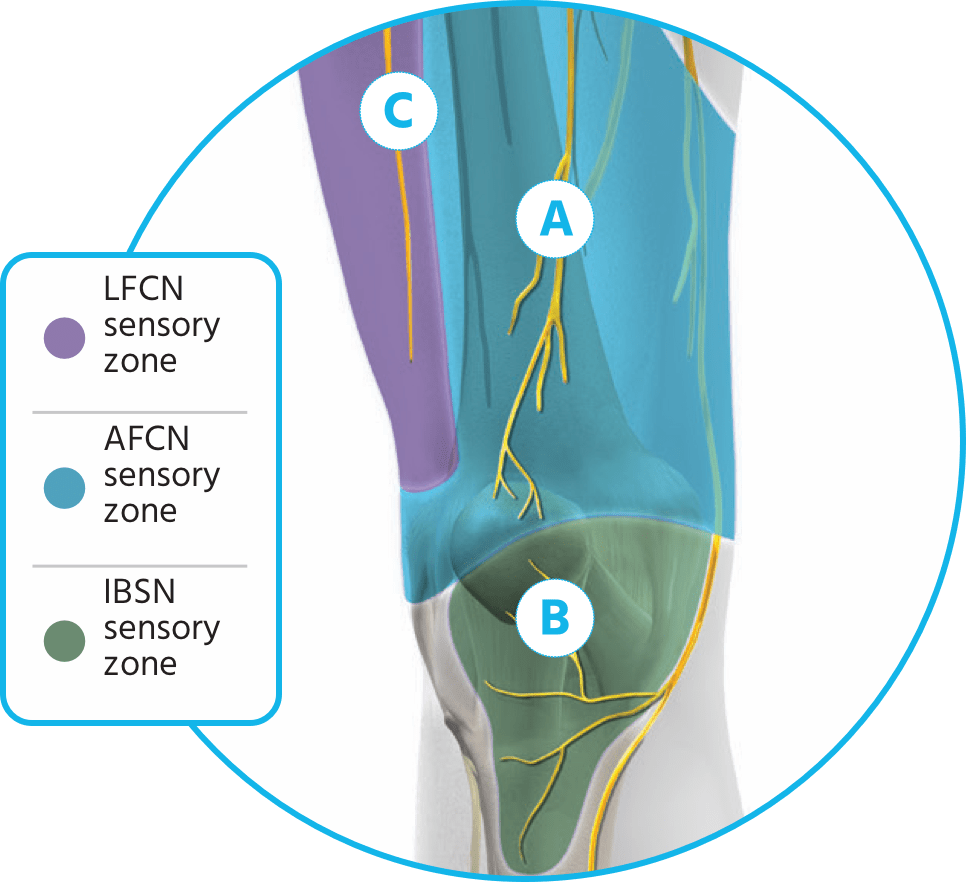 When iovera° is utilized for anterior (superficial genicular) knee pain and total knee arthroplasty incision-related pain, CPT code 64640 can be used to indicate treatment of EACH of the following associated nerves:

CPT code selection is based on clinician determination.

CPT code selection is based on clinician determination.

Who can assist with questions or requests for additional reimbursement support?

The Reimbursement Helpline was designed to help address your questions and provide assistance with navigating the reimbursement process.

Reach the Reimbursement Helpline at:

Can the Reimbursement Helpline help me with the proper verbiage on clinical notes and billing submissions?

Dedicated specialists are available to:

What is the best way to maximize my iovera° reimbursement?

As you know, you will base iovera° use on your clinical determination of which nerves need to be treated and not on reimbursement.

How can my practice get reimbursed to cover the cost of iovera°?

We are unable to talk about pricing and reimbursement in the same discussion. We are, however, permitted to discuss various pricing and contracting options for iovera° unrelated to reimbursement. We can also review reimbursement associated with iovera° based on your clinical judgment about which nerves will be treated.

Does the professional component rate for iovera° apply to Physician Assistants?

The professional component rates of CPT 64640 and 64624 in RVUs for Medicare are the same for either an MD or a DO. However, billing for Physician Assistant (PA) services is handled differently throughout the country. Generally, Medicare will defer to state laws regarding billing for PAs. Some private carriers want the PA credentialed, much like the doctors. Other private carriers will advise the client to bill the service or procedure under the supervising physician’s National Provider Identifier. Some carriers don’t recognize PAs at all and generally prefer the doctor’s provider number only. There are other issues, depending upon the state and carrier.

Please direct PA-related questions to our Reimbursement Helpline for assistance.

Is it necessary to provide the site of care where the iovera° treatment is performed? For example, is there any difference whether the treatment is being performed in a preanesthesia room prior to surgery or in the interventional radiology department?

The specific site of care should be noted (eg, office, operating room, postanesthesia care unit, etc) in your operative note.

If I used radiofrequency to treat a patient and billed CPT 64624, can I re-treat the patient using CPT 64624 for an iovera° treatment? If so, is there a limit to doing this in the same year?

The Medicare guidelines do not definitively state whether there is a limit on how many times a year you can bill CPT 64624. The procedure needs to be supported by medical necessity, including comprehensive clinical documentation with specific nerves being treated and the diagnosis code. Please be aware, this documentation does not guarantee reimbursement. We recommend that you contact our Reimbursement Helpline to review the situation prior to performing the treatment.

Unless there is a contract that includes bundling of procedures, the facility fee would apply to the CPT codes for the iovera° treatments and the TKA CPT code. The ICD-10-CM diagnosis code does not affect whether a CPT is captured in an outpatient setting.

It’s important to be aware that the global period for CPT 64640 and 64624 is 10 days. This may impact the TKA reimbursement if the iovera° treatments and TKA are performed on the same day.

Please contact our Reimbursement Helpline to review the specific situation for appropriate guidance and support.

When treating the 3 nerves for AFCN and ISN as well as the deep genicular nerves, what would be the total relative value units (RVUs)?

The total RVUs would be based on the RVUs specific to the work component:

Based on the 3 nerves treated, the work RVUs would be 6.46 work RVUs. It’s also possible that you may have contracts with hospitals that may have different RVUs assigned than the Medicare RVUs. Please see the Coding and Medication Guide for more information.

Can iovera° be performed on the same day as a TKA procedure, and would my practice be reimbursed for both the iovera° treatments and the TKA procedure?

Although cryoneurolysis CPT codes applicable for iovera° treatments are not bundled into the TKA code by Medicare, there is no guarantee of reimbursement for both procedures on the same date of service.

The global period for CPT 64640 and CPT 64624 is 10 days, which is counted as day 1 for the date of service (DOS) plus 10 days, for a total period of 11 days. This should be the time frame between the iovera° treatment(s) and the TKA. We would not definitively advise you that both procedures cannot be performed on the same date of service, but doing so may result in a denial for either the iovera° treatment(s) or the TKA. Modifiers may also be needed to bill these procedures on the same day. Commercial payer policies vary.

We recommend that you contact our Reimbursement Helpline in advance to further discuss the situation and obtain guidance.

Can both the superficial and deep genicular nerves be treated during the same session? If yes, how would the procedures be billed and reimbursed?

Modifier 51 may be required, and some commercial payers may require Modifier 59. 64624 should be listed first since it has the highest RVU. Billing both 64624 and 64640 will result in applying multiple procedure billing rules depending on the number of nerves treated using CPT 64640.

Our dedicated reimbursement specialists at the Reimbursement Helpline are happy to provide additional support and assistance.

Does Medicare limit how many times CPT 64640 can be billed per year? For example, if the patient is pain free for 6 months after iovera° treatments and their pain returns, how should I justify the medical necessity of any subsequent treatments?

The Medicare guidelines do not definitively state whether there is a limit on how many times a year you can bill CPT 64640. The procedure needs to be supported by medical necessity, including comprehensive clinical documentation with specific nerves being treated and the diagnosis code. Please be aware, this documentation does not guarantee reimbursement. We recommend that you contact our Reimbursement Helpline to review the situation prior to performing the treatment.

Which commercial payers are reimbursing iovera°?

Yes, the reimbursement rates provided in the iovera° Coding and Reimbursement Guide represent Medicare’s national average rates. Your biller or administrator is likely to be familiar with their local Medicare entity, commonly known as their fiscal intermediary or Medicare Administrator Contractor (MAC), and can access your local market information. However, if your staff are not familiar with how to proceed or would like additional support, our dedicated reimbursement specialists can be reached through our Reimbursement Helpline for assistance.

You may contact the Reimbursement Helpline at 855-793-9727 or reimbursement@pacira.com. If you prefer, your iovera° representative can ask the helpline team to contact you at a convenient time or send you an email to initiate contact.

IndicationThe iovera° system is used to destroy tissue during surgical procedures by applying freezing cold. It can also be used to produce lesions in peripheral nervous tissue by the application of cold to the selected site for the blocking of pain. It is also indicated for the relief of pain and symptoms associated with osteoarthritis of the knee for up to 90 days. The iovera° system is not indicated for treatment of central nervous system tissue. The iovera° system’s “1x90” Smart Tip configuration (indicating one needle which is 90 mm long) can also facilitate target nerve location by conducting electrical nerve stimulation from a separate nerve stimulator.

ContraindicationsThe iovera° system is contraindicated for use in patients with the following:

Potential ComplicationsAs with any surgical treatment that uses needle-based therapy and local anesthesia, there is a potential for site-specific reactions, including, but not limited to:

Proper use of the device as described in the User Guide can help reduce or prevent the following complications:

The iovera° website is intended for US health care professionals only

Select the option that best describes you:

If you are a health care professional outside the US, please select your region: